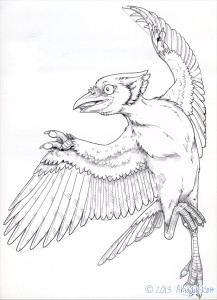 A quick "mockup", I suppose, for how this little fellow will ultimately come together. I had to take a copy of the original and then cut it up and assemble it, as the wings are actually separate images. (Totally nothing to do with the way I fudged my positioning on the original page, and the wingtip went off the edge. D'oh!)

This is going to be a biggish picture, as a "title page" for the short story I'm writing to go along with it. I have a couple of other pictures half-drawn (or planned) to add later; I've been wanting to shamelessly plagiarise have a go at Anna's really dramatic shading style and was going to use one of those to try it on. (I'm normally too much of a chicken, and have horrible tentative wishy-washy shading most of the time.)

This is (what Lii thinks is) an auwu, a kiravai pet. It's actually something else (nb: NOT a phoenix) in disguise, helping him escape his captors in the catacombs, but he doesn't work that out until the end.

Crossposted. This entry was originally posted at http://keaalu.dreamwidth.org/18709.html.
Collapse